Having a task of modeling a building façade with variation of openness of each unit, I found out there are 3 ways of doing the same task but with different challenges.  Resultant geometries look exactly the same but the application for the 3 methods are different.  I am going to compare them in 4 aspects: ease of modeling, file size/processing time, manipulation of parameter, reporting/scheduling.

The façade consists of units of 400 x 400 x 150mm.  The geometry of the unit is composed of 4 pyramids.  The vertices of the pyramids vary to change the openness.  With  placement of units of varying openness, the façade is made with a random pattern giving interesting shade and shadow.

Pretty straight forward, use technique of nesting to place the 4 pyramids on 4 sides id the unit.

Instead the reference planes are constrained to Reference Level.

Parameter “Panel Opening Width” control the location of the opening vertices.  “Opening Vertices Offset” controls the vertices’  drop from the exterior face of the unit.

Create curtain panel pattern based family.  Create a void sweep to locate points for the vertices of the pyramids. Join the points with reference lines.  Create solid by lofting reference lines.

Value of Panel Opening Width can only be edited in “Edit-in-place” mode as the curtain pattern families are inside the in-place mass. Parameter value per unit can only be input one by one in the properties box.

Create a 5 points adaptive component family, with 4 points being the corners of the unit and an extra point being a stationary point which allows a reporting parameter measuring from it to one of the corners of the unit.  The reporting parameter is driving the opening width of each unit.  Similar to the construction of the curtain panel pattern based family, a void sweep is first created to locate the points the vertices of the pyramids.  However, when locating the vertices of the opening using reference line joining adaptive points, a problem is found.  Using the same strategy as in the curtain pattern family, create a reference line by joining two adaptive points.  Place 2 points on the reference line with normalized curve parameter.  Place 2 points on top of the 2 points on the reference line.  Offset the points to locate the vertices of the opening.

However, when used in a divided surface, the points are not located as desired.  The offset is measured in a wrong direction.

Another attempt of locating the vertices of the opening using a reference line from the face of the back of the unit.

Place on the divided surface, the locations of the vertices are correct.

Having located the points, construct the unit with points and reference lines.

Repeat the adaptive component on the entire surface.

As the reporting parameter L which measures the distance of the left corner of the unit from the stationary point varies from unit to unit, the opening width of the unit varies with L as it is driven by a trigonometric function of L.

Base on the nature and behavior of different types of families, the curtain wall, curtain pattern and adaptive component are compared.

6 responses to “Curtain Wall vs. Curtain Pattern vs. Adaptive Component” 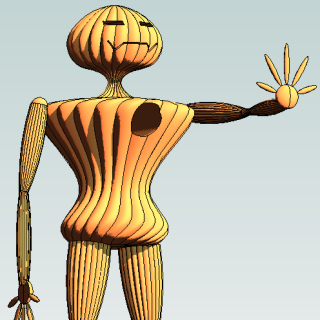